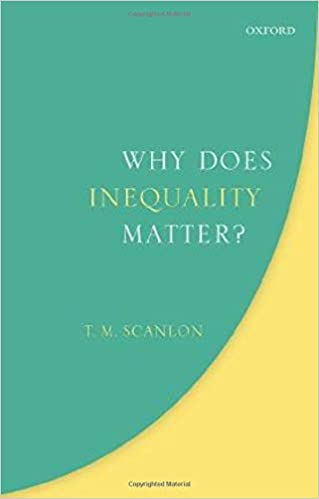 Review of Why Does Inequality Matter? By T. M. Scanlon

Why Does Inequality Matter?

A shorter version of this review appeared in the journal Poverty and Public Policy. (Here is an ungated PDF).

T. M. Scanlon has established himself as one of the most important contemporary scholars of distributive justice, and so his publication of Why Does Inequality Matter is worth attending to. In this short but dense book, he walks the reader methodically through a wide variety of arguments about social, economic, and political inequalities, and evaluates the associated moral arguments that might be made about them. In the process, he slowly builds the case that there are many good reasons to care about inequality, but that not all inequalities are necessarily unethical. If Scanlon is counted as an egalitarian, he is a relational egalitarian. He argues that inequality matters because it undermines or violates some important relationship or duty. That is where his unified theory ends, however, because Scanlon stresses that the differences between different inequalities should not be glossed over. The inequality of CEO versus entry level-worker compensation is not objectionable in the same way, or for the same reason, as gender inequality, for example.

More broadly, this book is, as the author describes it, not a narrow case for equality per se, but instead an exploration of the many reasons people might object to inequality. The two are different. One could, for example, not be concerned with bringing about economic equality at all, and still worry about the impact of inequality on the institutions that provide health, education, and democratic governance. In the end, the egalitarian principles that the author endorses are varied and nuanced. At a basic level, he rejects economic inequalities as unjust if they cannot be defended as the result of open and necessary institutional arrangements that benefit all.

In many ways, this is a book by a philosopher written for other political philosophers. Nevertheless, a wide variety of social scientists could gain much from this book. As an economist, I will try to target this review toward my colleagues in political science, economics, sociology, and public policy, even though the book contains conspicuously few p-values, case studies, or real-world examples. Analytic philosophers tend to work in thought experiments, and Scanlon is no exception. His book will be particularly useful to social scientists, however, because he does such a careful job drawing distinctions where those in the social sciences often elide important differences. Inequalities of different kinds are often mutually reinforcing, and a given disparity might be wrong for multiple reasons. It is no surprise, then, that social scientists, and especially humanists, will often write about inequality as if it is a monolithic thing that can be reduced to a simple question of power. This is a common error, but an error nonetheless. Egalitarian goals can be precise, and they can be varied, and scholarship like Scanlon’s will aid us in making these important distinctions.

Overview of the Book

The book is organized as a tour through different kinds of inequality. I will give the reader just a taste of the kinds of arguments he considers. In his introduction, he carefully introduces all of the different reasons for concern about inequality that he is going to examine. In chapter two, then, he starts his tour with some low hanging fruit. He considers whether inequality might not be wrong because it violates the principle that all people deserve equal concern. This standard certainly applies to the state, and his examples here involve times when the government has deprived some people of services or disadvantaged some citizens. The third chapter considers inequalities of status. Caste systems and social hierarchies are of interest here. He makes an interesting argument about the relationship between status, agency, and poverty in a way that could provide some philosophical heft to arguments about how to measure poverty.

In his fourth chapter, he moves heavily into the arena of debates about distributive justice by considering procedural fairness. The live question is whether inequality can be justified by the procedures that determined who is in the better position. Nozick famously argued that procedural fairness is the most important consideration, and Rawls also gave this concern considerable attention. Scanlon dives right in and gives a detailed account of equality of opportunity. He describes equality of opportunity arguments as a defense of some inequalities, with strict conditions. In particular, the privileged position must be necessary, the privilege accompanying the position must be essential to the position, and the procedure for determining who holds the position must be fair and open to all, and finally, it must be the case that there is no wrong done that prevented some from having the qualifications for the position. He focuses on the first part of this argument in this chapter and fleshes out what kind of institutions or positions of advantage could be justified. The requirements he places are strict and so simple appeals to productivity in the marketplace woll not be enough to justify unequal compensation. In this chapter, he also develops a condemnation of racial discrimination and institutional racism, and a defends of affirmative action policies.

In chapter five, he takes the equality of opportunity argument further, and considers the goal of “substantive opportunity.” The great difficulty in the concept of equality of opportunity is that wealthy parents can invest in their children in ways that give them a distinct advantage in schooling and the economy. Public schooling is a partial response to this problem. This practice may be impossible to avoid, but Scanlon suggests that we examine the institutional sorting mechanisms that encourage it, from hiring decisions to school admissions.

Scanlon next moves into the realm of politics, to address the common concern that inequality is bad because it gives the rich too much political power. Here he helpfully distinguishes between two problems. One injustice occurs when only rich people have access to the resources to run for office or make their voices heard. The second problem is when rich people get special access to politicians because of contributions or influence, and the result is governing that favors the rich. The first problem is an issue of procedural fairness, the second is a problem of professional standards.

The seventh chapter considers the arguments about property, taxation, and coercion. Redistributive egalitarian policies, in particular, are often opposed by those who have a strong view of the importance of self-ownership and property rights. Scanlon argues that the institutions that determine the “predistribution” are more important than redistribution, but that the latter can also be warranted. In particular, he does not accept that there is a kind of property right, prior to an institutional/legal framework, that one can appeal to in making judgments about laws.

The eighth chapter takes on the question of “desert” in economic distribution. Some argue that those who are wealthy often deserve their wealth, whereas others argue that they do not deserve their wealth. Both positions lean on what one deserves to make an argument about distribution. Scanlon rejects all such arguments since in each case the use of the word “desert” is just shorthand for an underlying conception of justice that should be examined. Deservedness has no independent role in distributive justice.

The tenth chapter is perhaps the most useful, as Scanlon tries to apply the principles developed to the case of increased income inequality. Here he briefly examines some specific economic evidence about institutions and distributional patterns and concludes that much of the inequality in income in the U.S. is likely not justified. Conclusions are hard to come to with great certainty, however, since his requirement for a justifiable inequality is dependent on a whole lifecycle of opportunities and institutional arrangements. This difficulty makes this chapter frustratingly inadequate as well since when it comes to evaluating the necessity and effects of various institutions, Scanlon’s treatment of economic and political arguments is cursory. Scanlon concludes the book by highlighting the varied nature of the conclusions that he draws about inequality.

Inequality is not Simple

One overarching lesson the reader gets from Scanlon’s book is that all attempts to make debates about inequality clean and simple must fail. This is true for two reasons. The first highlights a strength of the book, the second, a weakness. The strength of the book is in the author’s thorough consideration of moral arguments. For those on the left who see inequality as an obvious evil, this book will give too much credit to the arguments of libertarians. For those on the right who see inequality as neither good not bad, this book is especially worth considering. Scanlon’s chapter on coercion and property is particularly helpful for these debates. It turns out that most people’s moral intuitions about inequality do not withstand Scanlon’s scrutiny. Everyone who takes the time to work through his arguments will benefit, because the arguments, and underlying phenomena, are complex.

The weakness of the book also stems from the fact that Scanlon is not fully prepared to consider economic, political, and sociological evidence in any great detail. Many of the arguments about inequality depend on some empirical facts about the world. Does redistribution limit productivity? Is CEO pay the result of elite collusion? Can a “good education” actually provide economic opportunities? Is rising income inequality caused by technological change or increasing market power? Are consumption norms set by the rich or the middle class? Answers to empirical questions are sometimes drawn from good research but are rarely subjected to the kind of broader review of competing claims that social scientists would require. Too often Scanlon assumes an answer and moves on. For a philosophy book that is primarily concerned with moral arguments, this is forgivable. For a topic like this one, though, the argument is weakened considerably by the lack of attention to big debates and conflicting evidence about so many of these questions. It turns out that for a topic like inequality, drawing firm conclusions probably requires pretty deep interdisciplinary work.

Overall, this book is excellent. If social scientists want to pick up one book that covers the philosophical terrain efficiently, this is probably the best book on the market. Scanlon has been working with these arguments for many years, and it shows. Undergraduates outside of philosophy classes will probably find the book too dense to use beyond a chapter or two, and academics who pick up the book should already be somewhat familiar with philosophical ethics and theories of justice to get the most out of the book.